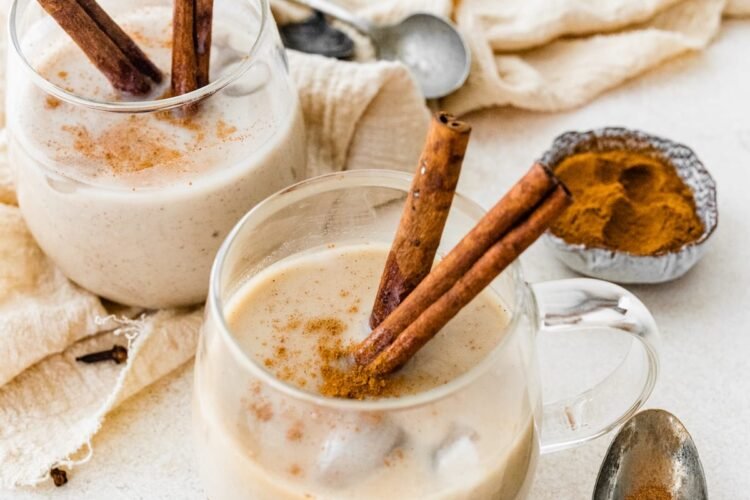 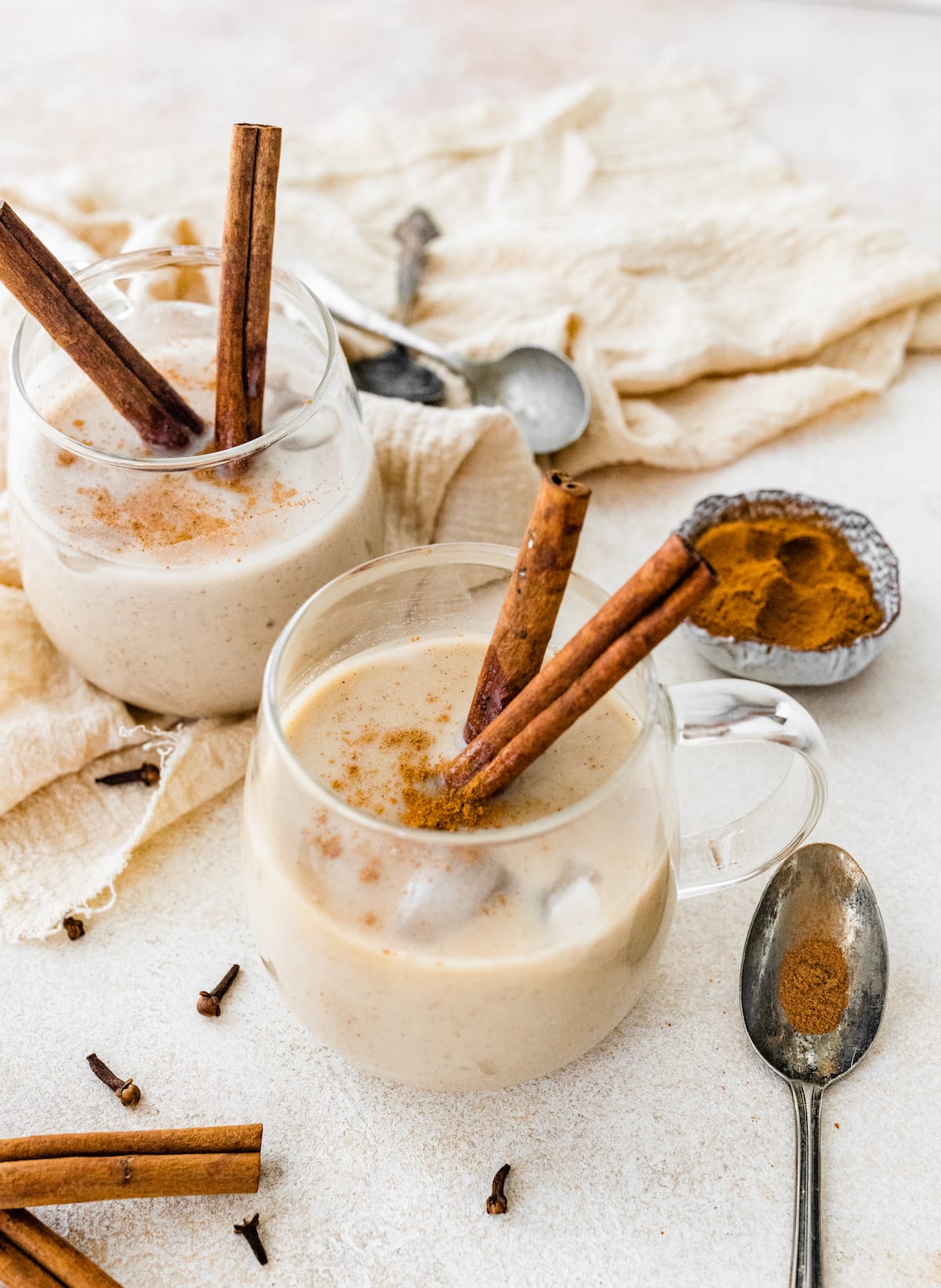 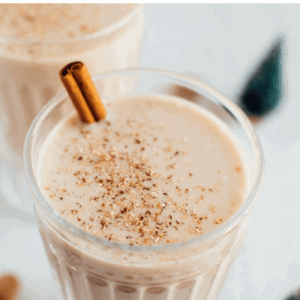 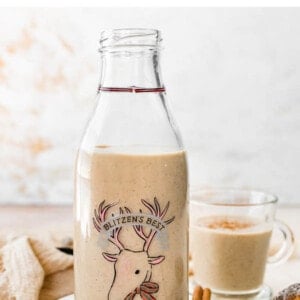 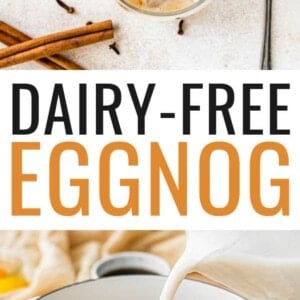 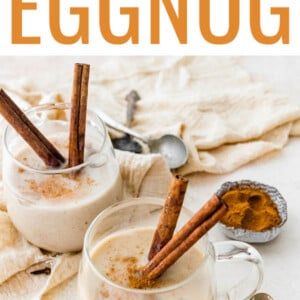 A lighter take on traditional eggnog made with almond and coconut milk and naturally sweetened with maple syrup. It’s rich and creamy, dairy-free and can be served with or without alcohol for a delicious holiday treat!

Eggnog is one of those things people tend to absolutely love or hate. I didn’t grow up drinking eggnog as a holiday tradition, but Isaac likes it so he introduced me to it a few years ago. As I’m typing this I’m realizing that it’s kind of funny that my Jewish husband is the one who introduced ME to eggnog.

Anyhow, once I tried eggnog I realized that while I adore the taste of it, I’m not so fond of its heaviness. Plus, there are a ton of ingredients in the packaged stuff that aren’t so EBF-friendly. Heavy cream, corn syrup, thickening agents and preservatives to name a few.

With that in mind I was inspired to create a lightened-up, clean-eating eggnog recipe that’s dairy-free, but still rich, thick and loaded with festive holiday spices. I ended up with a deliciously creamy, dairy-free eggnog that’s made with a blend of almond and coconut milk and naturally sweetened with maple syrup. No heavy cream or refined sugar here! 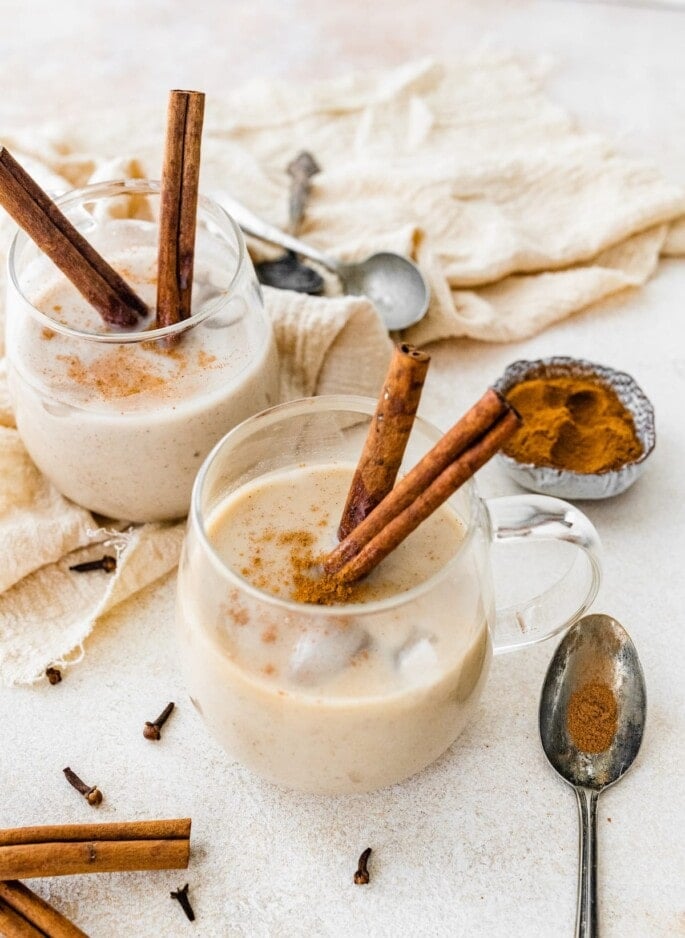 Why You’ll Love This Recipe 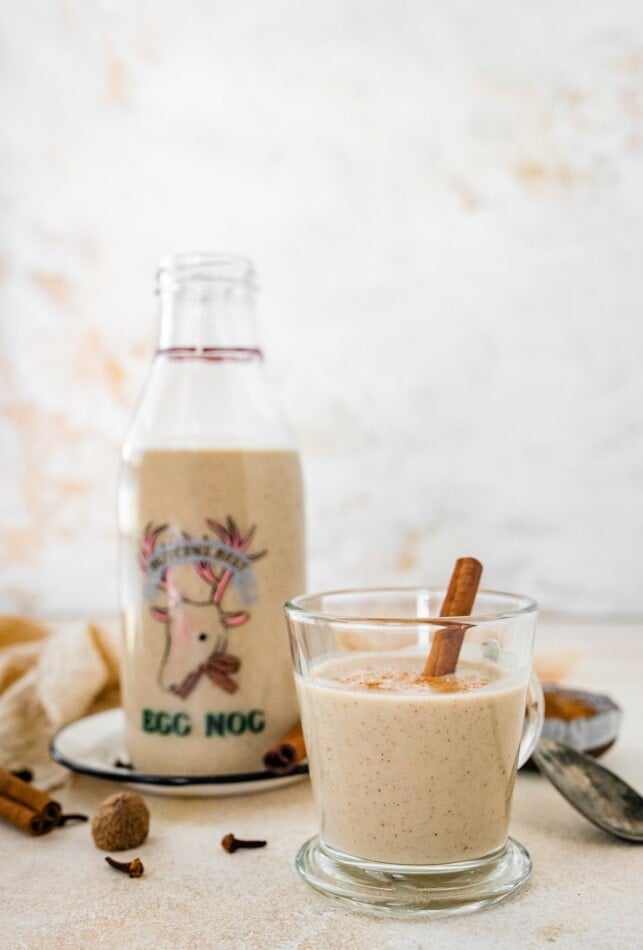 Eggnog is a classic chilled holiday drink made from milk, cream, sugar and eggs, often with a splash of rum or brandy. It’s thought to have originated in medieval England, where it was known as “posset.” Posset was a hot drink made from milk and wine or ale, thickened with eggs. Eggnog may have evolved from posset, or it may be a completely separate drink with a similar name and origin. These days, eggnog is a holiday staple and it can be found in stores and homes across the country during the Christmas season. 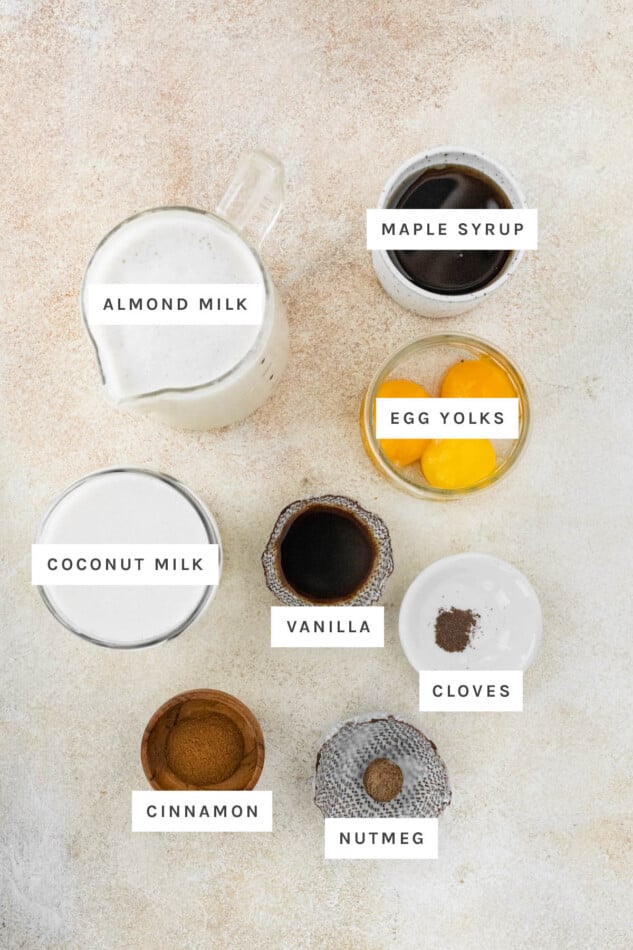 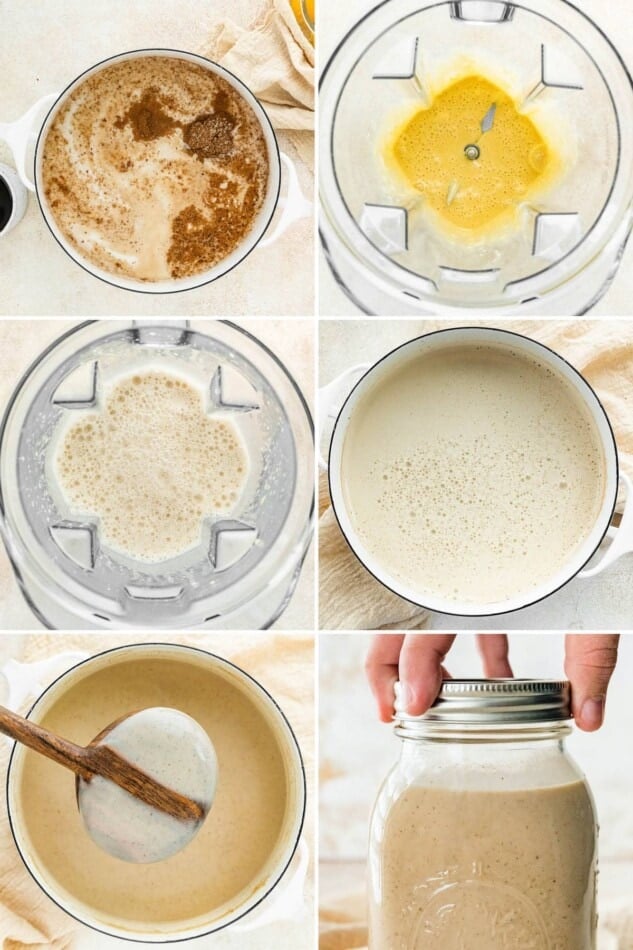 How to Make Dairy-Free Eggnog

Simmer: Add the almond milk, coconut milk, vanilla, cinnamon, nutmeg and cloves to a small pot and heat over medium heat until simmering. Do not bring it to a boil!

Blend: Meanwhile, place the egg yolks and maple syrup in a blender and blend for about 30 seconds, until light and fluffy.

Combine: Once the milk is simmering, turn the blender on low and slowly add the milk mixture to the egg yolk mixture a little at a time. This step is important because if you pour it in all at once the egg yolks will likely curdle.

Heat: Add the eggnog mixture back to the saucepan and heat over medium-low heat, whisking constantly until thick, about 10-15 minutes. At this point the eggnog should be thick enough to coat the back of a spoon. Remove from heat and let cool to room temperature.

Chill: Transfer to a jar (I used a 32 oz mason jar), cover and refrigerate overnight or for a few hours until chilled.

Serve: Serve chilled over a cube or two of ice with a sprinkle of cinnamon on top and a cinnamon stick. Add a splash of rum or whiskey if using, and enjoy! 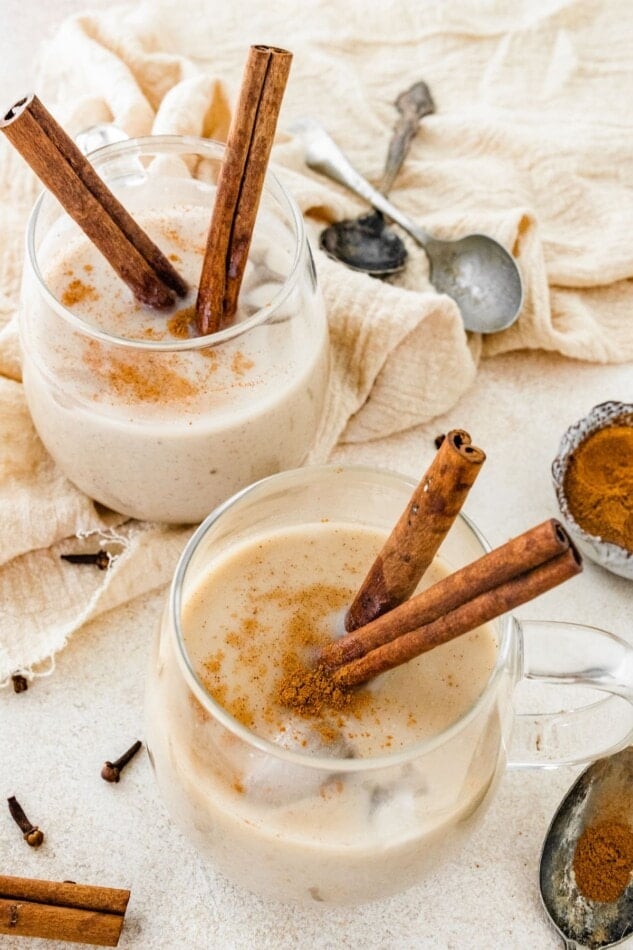 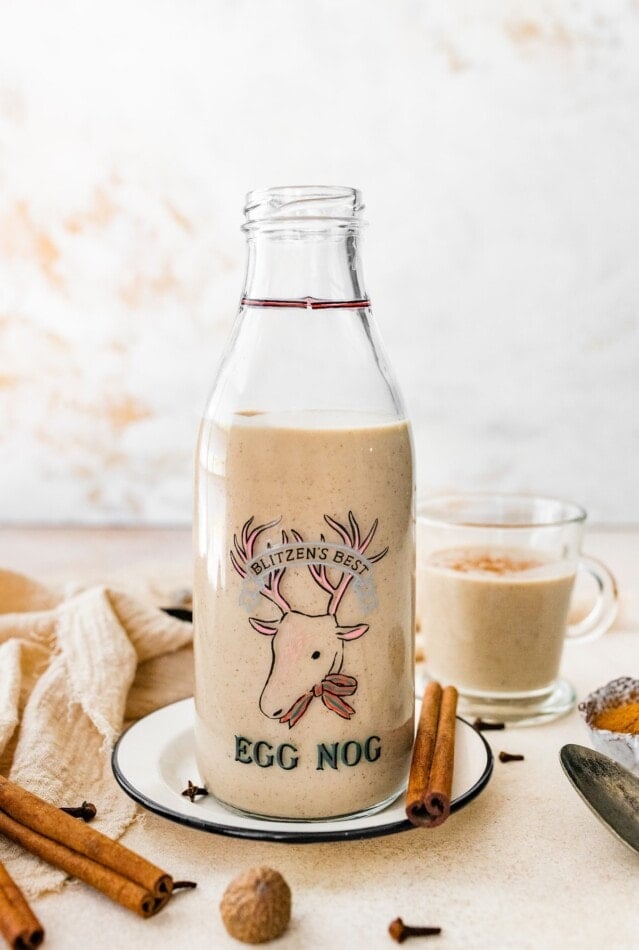 You can store your eggnog in a jar with a tight lid in the refrigerator for 2-3 days. I prefer to use a 32 oz mason jar for storage. If you add alcohol to the eggnog it will be good for up to one week in the fridge.

Why does eggnog curdle?

This dairy-free eggnog can curdle quite easily if you’re not careful! It’s very important to add the warm milk mixture to the egg mixture slowly while in the blender and to keep your stovetop at a medium-low temp when heating. If the saucepan gets too hot or is left on the heat too long your eggnog will curdle. It’s also important to constantly stir your eggnog while it’s on the heat. If you skip this step it can cause the eggnog to curdle.

Does eggnog have raw egg?

Yes, eggnog has raw egg in it. There are some risks associated with drinking raw eggs, but these can be minimized by using fresh eggs from a reputable source, and by taking care to avoid cross-contamination.

What alcohol goes best in eggnog?

Do you serve eggnog hot or cold?

Some people prefer their eggnog piping hot while others prefer it ice cold. There are even some people who like to enjoy their eggnog at room temperature. No matter how you like your eggnog, it is sure to be delicious.

Be sure to check out the full collection of cocktail recipes and holiday recipes here on EBF!

A lighter take on traditional eggnog made with almond and coconut milk and naturally sweetened with maple syrup. It’s rich and creamy, dairy-free and can be served with or without alcohol for a delicious holiday treat! 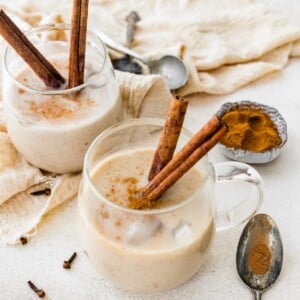 DID YOU MAKE THIS RECIPE?

This post may include affiliate links. Thank you for your support.