Oh, how far have I come. Do you see that little green sprig, so innocent, so gentle, lying up there sweetly on that pile of noodles? Just a few years ago, I would have rather chewed on a stick than put a bit of cilantro into my meal, and certainly not for a reason as frivolous as garnish. Feh. But today, bring on the cilantro in all its weird glory! I want to strew with it! I might even chew on it, for a bit.

(See wan plate below for comparison: definitely in need of a little sprucing, wouldn’t you say?) 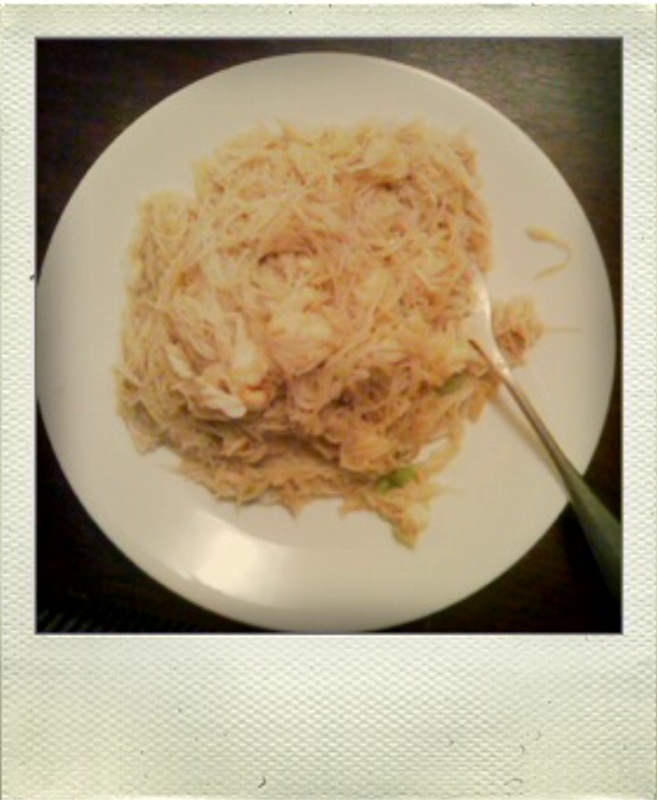 Luckily, the dish itself is quite tasty even without the cilantro and, man, is it fast. I do believe this counts as one of the speediest meals I’ve ever made that involved turning on a stove (and that does not include scrambled eggs, thankyouverymuch).

A brief aside on the nitty gritty: First of all, I couldn’t find glass noodles. I bought Thai rice noodles instead, because it’s all I could find that was even close, even though this is a dish from a Vietnamese chef. Don’t do what I did: the rice noodles really aren’t right here because of their texture, even though I thought the dish still quite delicious. You need that sort of chewy, pliant wonderfulness of a glass noodle here. Second of all, I bought canned crab instead of fresh. It was way cheaper and wild-caught, which is more than I could say for the frozen stuff available at the fish store in Forest Hills. (Which, maddeningly, closes by 6:30 every night, without fail. And refuses to label where the fish comes from. And doesn’t give a hoot about all of this stuff either. Out-of-work, ethically-minded, entrepreneurial fishmongers of New York: come to Queens, would you? We need you.) Ultimately, between all the flavorings and the ratio of noodle to sauce to crab, I couldn’t tell that the crab was canned (it tasted pretty good, is what I’m trying to say).

The recipe comes from an old column called The Chef that used to run in the New York Times and that I adored. One of the section’s writers, like Mark Bittman or Amanda Hesser, would go and spend some time with a chef (like Charles Phan of the Slanted Door in San Francisco, or Gabrielle Hamilton of New York City’s Prune) and just shoot the breeze for a while, watching them cook, hearing them tell stories. That would get distilled into a little piece or several little pieces about the chef, his or her work and the restaurant they ran, with a few, truly choice recipes alongside (miraculously perfect for the home cook). That column is long-gone, sadly, and I never understood why. Does anyone reading this know Pete Wells? Tell him to bring back that column! It was such a gem.

I found these noodles to be compulsively edible. They slip down easily and are pretty light to boot. Plus the combination of oyster sauce, soy sauce, fish sauce and sesame oil is irresistible: salty, nuanced, toasty, just so good. This is fast food at its best, and if you buy canned crab, even if it’s wild-caught, it’s cheap food, too.

1. Cover noodles in warm water for about 10 minutes. Drain.

2. Put oil in a wok or large skillet, and turn heat to high. A minute later, add garlic and half the scallions and, almost immediately, the noodles and crab. Toss, and stir to mix the ingredients.

3. Add the sauces, taste, and adjust seasoning as necessary. Toss with sesame oil and remaining scallions. Garnish, and serve.